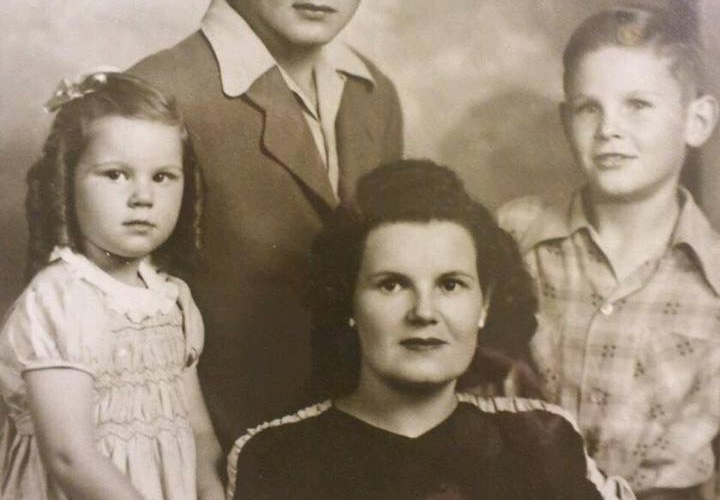 He slept in, ate his breakfast, read the paper and drank his coffee a year ago. He didn’t have trouble speaking, breathing, chewing or walking then. He wasn’t on oxygen or jaundiced or in pain. Grandpa was fine.

Last Christmas, I found myself struggling financially and decided to give the gift of homemade meals and treats to my grandparents — a rather humble gift, considering they had been letting me live with them rent-free for over a year and a half. Two envelopes were opened at my aunt Laura’s house, one for my grandma and one for grandpa. Inside was a coupon for their favorite dish. My grandma’s coupon was for soup and my grandpa’s for bread pudding.

His mom used to make it for him as a kid. My grandpa suffered from dementia and I thought that making him something that tasted like his childhood, like memories, would help him feel better.

Sometimes we would look out the window in the kitchen on the land his parents homesteaded as morning snow fell and he would be sure as hell we were in California. One time he thought I was his cousin. He never forgot my name, though.

My grandpa never redeemed his coupon. I would tell him I would make it this weekend or next week. “Just let me know when you want it.” He never asked and I never went to the store to get the ingredients. Social, school and work lives came before bread pudding.

This fall, after I finished my job working 15-hour shifts on the train for the summer, I tried to make time for bread pudding. Several ambulances, emergency room visits and tests later confirmed my grandpa’s deterioration wasn’t temporary. First, he was given a walker. He didn’t like to use it. Then came oxygen and then came a liquid diet. Problems chewing is a symptom of late-stage dementia. Smoothies, protein shakes and mashed potatoes for grandpa. Now he couldn’t eat bread pudding, even if he wanted to, even if I actually made time to make it.He was in the hospital for weeks. He wouldn’t eat much. He wouldn’t talk much. He wasn’t awake much. His eyes were hardly open, his breathing was labored and his skin was yellow the last time I saw him in October. I held his hand and told him to feel better and that I would see him later. I wouldn’t: he died the next morning.

I couldn’t find his mom’s recipe, but grandma said the Betty Crocker recipe was just fine. I’m not adding raisins because we don’t have any, but you could add raisins and serve with whipped cream if you so desire.

Preheat your oven to 350 degrees. In a saucepan, heat milk and butter over medium heat until the butter is melted.

In a bowl, mix together eggs, sugar, cinnamon and salt. Add the bread and milk mixture. Stir together and pour into a pan.

3. Bake for 40 to 45 minutes, or until a knife or fork inserted 1 inch from the edge comes out clean. Serve warm with whipped cream. Adapted from bettycrocker.com.

Originally published in The Spenardian

The windmill standing in the old Chilkoot Charlie’s parking lot has created a life for itself as an Anchorage landmark and a symbol of Spenardian culture.

One of the most distinct features of the Spenard area is the old ornamental windmill looming over the Koot’s parking lot. The windmill is decorated with lights of green, red and white. Many remember it always being there at Koot’s, but the windmill’s history extends beyond the parking lot of the infamous watering hole.

The windmill lived on East Fireweed Lane for many years, with different owners as years passed. By the 1970s the windmill was in the hands of a local character known as “Mafia Mike.” Mafia Mike told Mike Gordon, owner of Chilkoot Charlie’s at the time, that he would donate the windmill to him if he paid to have it moved to his parking lot. Part of the contract noted that a plaque be placed on the windmill forever honoring Mafia Mike’s donation. The deed was done and the windmill was installed in the Koot’s parking lot in the early 1980s. The plaque is now missing, but the windmill is here to stay.

The windmill currently stands above the Spenard Farmers Market every summer as well as the Spenard Food Truck Carnival. These events use the windmill as a landmark to let locals know the events are- “under the windmill.” Both events stem from local initiative and thrive on the quirky culture of the area. 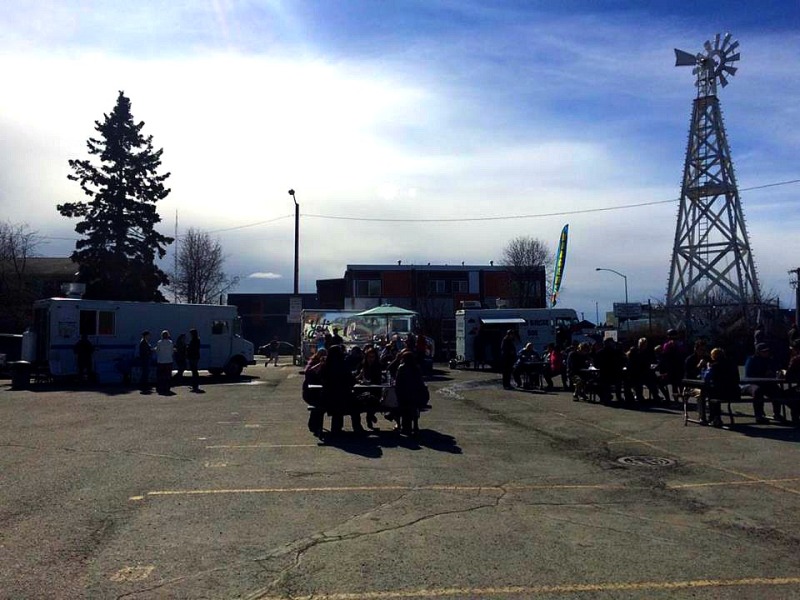 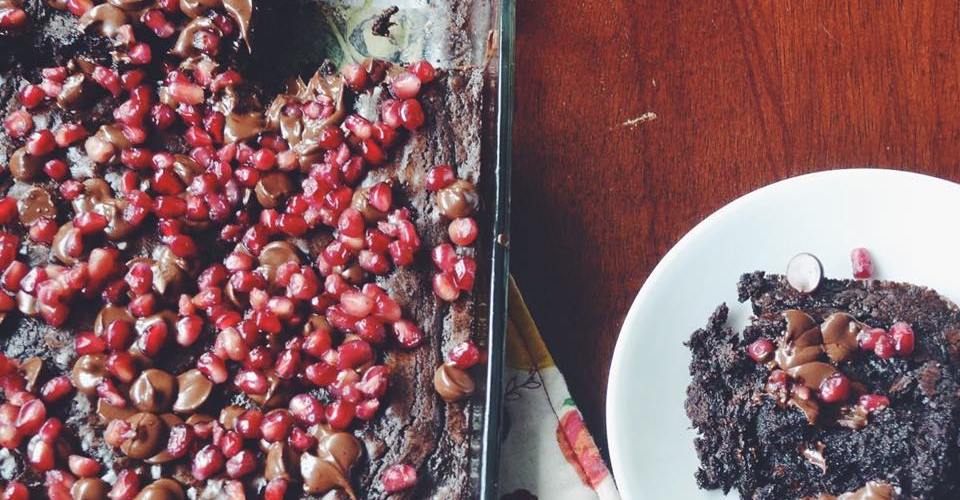 Originally published in The Northern Light.

An aphrodisiac is considered to be any substance that’s consumed to increase libido. Popular aphrodisiacs you may have heard of before include oysters, dark chocolate and red wine. With little research on the effect of aphrodisiacs, most evidence is subjective. Whether it’s a placebo effect or the real deal, a delicious aphrodisiac inspired meal this Valentine’s Day is sure to please any date, in or out of the bedroom.

From the dangerously delicious to the down-right disgusting, aphrodisiacs vary and may even be counter-intuitive. Balut, the Filipino delicacy that is fertilized duck egg, is famous for its aphrodisiac qualities. In my travels to the Philippines, I tried Balut, and the only desire I had afterwards was to vomit. If you’re curious, or desperate, you can find Balut at the New Sagaya Midtown Market.

For an Alaskan themed Valentine’s dinner, focus on fresh seafood, especially oysters. Make your way over to the Bubbly Mermaid in downtown Anchorage where they have a monopoly on the best oysters and champagne in town, creating the perfect recipe for a romantic evening. Legend has it that Aphrodite arose from the sea in an oyster shell as the Goddess of love and fertility. Salmon is said to have aphrodisiac elements as well. For the adventurous eater, crushed up caribou antler and bear claw are sought out by the Far East as a powerful aphrodisiac. I do not recommend trying to get your hands on it, but the oosik bone — the baculum or penal bone of walruses, seals, sea lions and polar bears — is sold on the black market by Native Alaskan’s to buyers in Asia who prize the bone as an aphrodisiac, according to Jeremy Sacks, author of “Culture, Cash or Calories: Interpreting Alaska Native Subsistence Rights.”

Champagne and red wine is a Valentine’s Day classic, but don’t totally rule out the power of beer. Before beer was made with hops it was produced using gruit, a collection of herbs used to bitter and flavor beer. The use of gruit was left to the wayside when the puritan and protestant brewers wanted to phase out the, apparently, aphrodisiac qualities that gruit supposedly possess. Using hops grew in popularity and has been the norm in beer ever since. However, modern brewers are looking to this old fashioned way of making beer as a unique way of flavoring their ales. Breweries in Alaska, in fact, are venturing into the gruit world. Alaska Brewing Company’s Alaska Winter Ale, is made with a combination of gruit and hops, as is the Baranof Island Brewing Company’s Sitka Spruce Tip Ale. The aphrodisiac qualities of these specific beers are unknown, but it’s worth a shot.

Whether fact or fiction many of the above mentioned foods will make for a great dinner, snack or even conversation starter.

Inspired by a recipe I found on Pinterest, this recipe was posted on the food blog “With food+love” and was titled Pomegranate brownies with cacao nibs and sea salt. I decided to give it the college student spin and make it for myself. I used a box brownie mix and dark chocolate chips instead of cacao nibs and bought pomegranate seeds already harvested from the fruit, which made the process much simpler. I also opted out of the sea salt as I felt there was already so much going on with the brownie as is. Don’t forget to account for the ingredients needed as part of the box brownie mix. This usually includes one or two eggs and oil.

1 and 1/2 cup of dark chocolate chips

1. Spray the baking pan with cooking oil and preheat the oven to the temperature indicated on the box.

2. Prepare the brownie mix as indicated on the box.

3. Pour one cup of the chocolate chips into the brownie batter and stir them in until mixed well.

4. Pour the entire bowl of batter into the oiled baking pan until all the batter is evenly distributed into the bowl.

5. When the oven is preheated cook the brownies for the time indicated on the box.

7. When the brownies are done immediately sprinkle the 1/2 cup of dark chocolate chips over the brownies.

8. Sprinkle the pomegranate seeds over the brownies.

9. Let brownies cool for about 15 minutes and serve to the one you love. 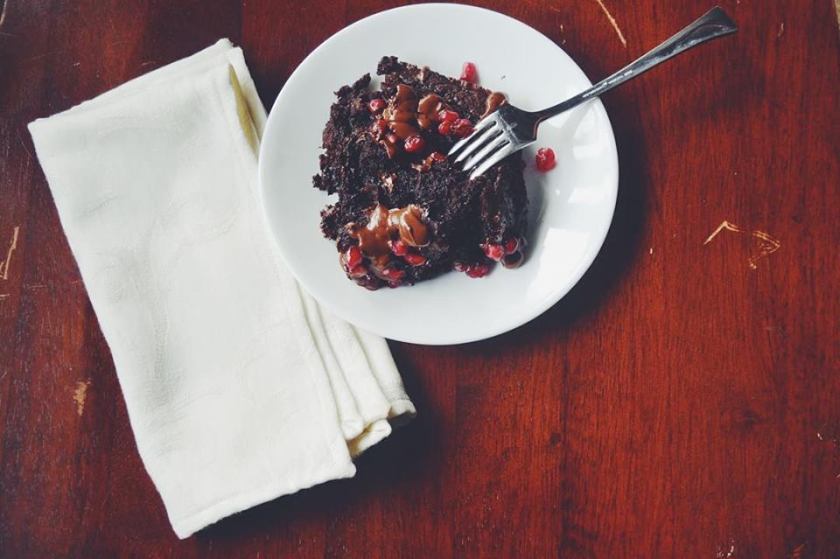