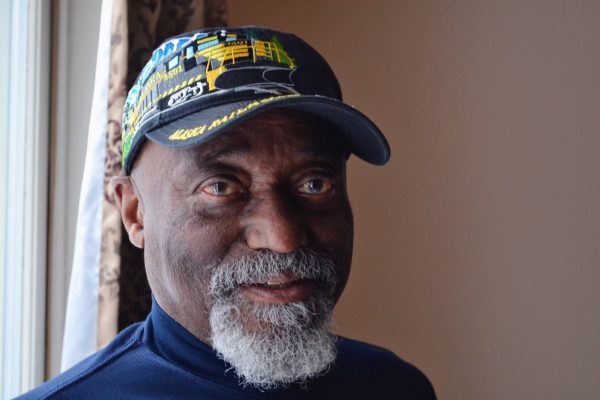 Harry Ross started moving trains when he was 21. Fifty years later, he’s still transporting passengers and freight by rail across the state.

“I do not believe there has ever been nobody as foolish as I,” Ross said.

It wasn’t a job Ross expected to get, and it wasn’t the job he originally hoped for. After graduating from East High School in 1964, Ross worked as a mess attendant at Elmendorf Air Force Base. His mom wanted more for him and sent him to college in San Francisco. After dropping out of school, Ross applied for two jobs, one with Western Airlines, now Delta, and one with the Alaska Railroad.

Ross has been the number one conductor at the Alaska Railroad for over half of his career.

Having the highest seniority among conductors comes with some perks. Ross says he gets the first pick of routes and vacation time.

“Everybody salutes you, like, ‘hey number one.’ They don’t call you Harry Ross they say ‘hey number one,’ and you know, that’s pretty interesting and fun,” Ross said.

The workplace wasn’t always so friendly towards Ross. As the first minority trainman hired by the company, Ross says he was met with opposition almost immediately.

“I had a lot of people that I worked with, that did not want to work with me only because of the color of my skin,” Ross said. “And, of course, that didn’t bother me because I’ve always been a people person and I figured one way or another I was gonna win them over. One by one I did, and there were some, of course, I didn’t. And it’s not gonna change those people that’s just the way they are.”

In his time at the railroad, Ross has seen the company go from federally owned to state owned. He says safety is a higher priority and the trains are more heavily regulated. Ross says the best change the railroad implemented in his 50 years is the Alaska Railroad Tour Guide program. The program began in 1980 and is open to high school juniors and seniors enrolled in the Anchorage School District.

“Well, basically it gives the kids a chance to get into the job market,” Ross said. “I enjoy working with these kids because everybody’s energetic and they really love what they’re doing.”

Jon Mobley was a tour guide in 2009 and worked at the railroad in multiple positions, including conductor, until 2017. Mobley says after years of mentoring under Ross, they’re like family now.

“He taught me a lot when I was in the tour guide program, just as a tour guide, and he taught me even more when I climbed the ladder and finally became a conductor. He’s been very crucial to my time at the railroad,” Mobley said.

Ross says he plans to retire at the end of the summer.

“I don’t know how it’s going to feel when I have to say goodbye. I know eventually it’s going to come,” Ross said. “I don’t want to die on the job. I want to enjoy some of my life that I have left, but I can say that I will truly miss what I have been doing the last 50 years.”

Ross says he plans on writing a memoir about his life growing up in Alaska and his time working on the railroad.