Originally published on The Spenardian.

The Carousel Lounge, one of Spenard’s most iconic bars, may see a revival.

Paul Berger, a determined Anchorage businessman wants to bring a neighborhood-oriented bar to the vacant building, called the Bar on Spenard.

“I would really love to have people just walk over,” Berger said. “Neighborhood guys and gals. I want to really focus on the people of Spenard.”

Berger said he wants to steer away from the loud, rock and roll bands that frequently played at the Carousel Lounge. Instead, Berger said he hopes to feature local acoustic acts on occasion and have a jukebox.

“I’m a business guy, not a bar guy… We are going to have a well-run, neighborhood bar, sports, pool, darts,” Berger said.

The building also features eight apartment units, which Berger is currently renting out. 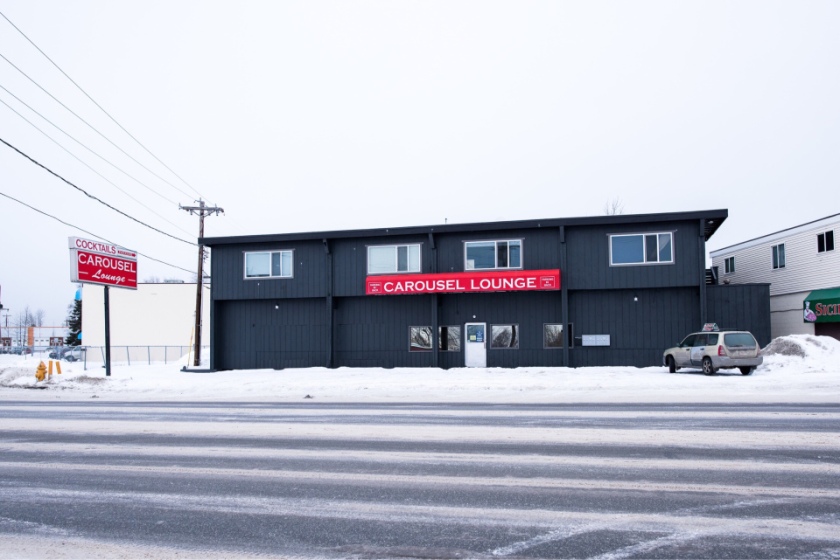 Photo by Young Kim for The Spenardian

The building was built in 1964 and opened as the Carousel Lounge in 1967 under the management of Steve Cooper.

In 2003 new owners purchased the bar and painted the exterior red with stripes in honor of Van Halen. The Carousel Lounge served its last drink May 15, 2016. The Anchorage Daily Newsreported that the closure was due to the economy and health issues with one of the co-owners.

The bar was frequented by the Hells Angels in the 70s and 80s, Brenda Lee Fowler remembers the bar’s many biker parties.

“Back in the old days Hells Angels used to throw a lot of parties there… I was married to a Hells Angel back in those days, so I know quite well,” Fowler said.

Missy Mae has similar memories of her time spent at the Carousel Lounge, and said she was sad to see the bar close.

“[The bar hosted] people of different personalities and backgrounds having drinks with friends playing pool or darts,” Mae said.

Jody Tate frequented the bar with her father, a salesman, on his business trips there. Tate said she loves the idea of reopening the bar.

“I… fondly remember Spenard, it’s hardly changed since the 1950s when we moved to Anchorage,” Tate said. “The dynamics of Anchorage have certainly changed through the years with the closing of so many old-timey bars downtown. Anchorage used to have two bars for every church when I was growing up.”

Both Fowler and Mae also said they think reopening the bar is a good idea.

Not all are eager to welcome Berger and his Bar on Spenard into the community. Berger gave a presentation of his business plans to the Spenard Community Council on Feb. 7, as protocol for the transfer of his liquor license, which would be coming from midtown’s Turnagain Arm Pit. Members of the council had concerns ranging from noise pollution to parking.

“I get it. There was rough ownership the last 13 years. The bar got into very bad shape and pissed off all the neighbors,” Berger said. “I get why [members of the community council] are ticked off.”

Tom McGrath has been involved with the Spenard Community Council since the 1980s. McGrath owns land across the street from the bar, and in the 80s patrons of the Carousel Lounge began to park on McGrath’s property, and other neighboring lots.

“The biggest problem was they never had any parking,” McGrath said. “The customers have always just parked in neighbor’s spots. It’s always caused problems for years and years. If it goes back into business, it’s just going to cause problems.”

McGrath offered a resolution for Berger at the community council meeting, that cited the parking issues. To supply more parking McGrath pointed to a lot next door to the bar that is up for sale.

“Well, if he buys the lot, then we don’t have any problem with it all,” McGrath said. “Welcome to the neighborhood.”

Berger expressed interested in buying the lot, but said he does not want to have to.

The Spenard Community Council voted to pass a resolution opposing the Conditional Land Use Permit for the Bar on Spenard, citing issues with parking that were not addressed in Berger’s original plan, including handicap parking, snow storage, tenant parking, rear access to the building, landscaping and grandfather rights for the special land use permit and liquor license.

Berger will be addressing these concerns and more at the Anchorage Assembly, Feb. 27 at 6 p.m. at the Loussac Library. There he will be requesting a special land use permit that will allow him to serve alcohol at the property of the old Carousel Lounge.