It’s bright yellow and only flown in only a couple spots around the city. Few people have probably seen Anchorage’s municipal flag, but it plays an important role in the city’s symbolism. Victoria Petersen has the story.

At Anchorage’s public library, the geese are returning from winter, and people are shuffling in and out of the newly renovated building. Abigail Ash comes here two, to three times a week, always passing by the library’s three large flagpoles.

“I noticed the flag, but I didn’t know what it stood for. My daughter’s even come here and they’re like ‘what’s that?’ It’s like ‘I have no clue’,”

Ash is referring to the municipal flag, which flies next to the U.S. flag and the state flag at the library.

Most people don’t notice it, or know what it stands for. Don Burgman also frequents the library about twice a week.

“I look at the flags, all three of them, and occasionally I notice they’re at half mast and I’m curious about why. But I never noticed it was the city flag. Now that I know that I’ll appreciate it,”

The library and museum are among the few places in Anchorage where you can see the flag flying in the wind. Both Burgman and Ash agree that Anchorage needs a city flag, and that they’d like to see it around more.

The flag features the municipal seal, designed with Captain Cook’s ship the Resolution, a nod to the explorer’s history with Anchorage. It has a large anchor and a small airplane to symbolize Anchorage as a port and as the air crossroads of the world. The seal sits on a field of bright yellow, and the words Anchorage, Alaska adorn the top and the bottom of the seal. 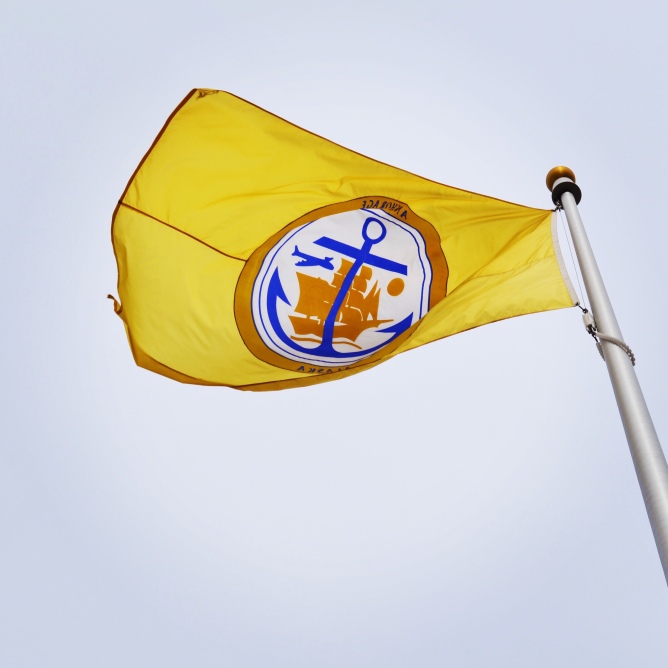 Ted Kaye is a vexillologist, which means he studies the design of flags. Kaye lives in Portland and is the secretary for the North American Vexillological Association He says poorly designed city flags are flown less. Which may explain why few Anchorage residents recognize their flag.

“I like to say that in every bad flag design, there’s a good flag design trying to get out. Anchorage’s flag is no exception. It has great imagery, an anchor for Anchorage is just super. But writing the words Anchorage, Alaska on the flag, in a sense, shows that Anchorage is insecure about its symbolism.”

Kaye has written numerous books about flag design, including one about the history and design of 150 different city flags across the nation. He says his researchers found nearly nothing gathering information about Anchorage’s flag page.

“We know what the design represents, but we didn’t know who had designed it or exactly when. That was just not available to our researchers when we contacted Anchorage.”

After reaching out to the museum, the Mayor’s office and the library, it was discovered that Anchorage artist Joan Kimura was the original designer. A long time artist in Anchorage, Kimura taught art at the University of Alaska Anchorage, and formerly the Anchorage Community College from 1973 to 1994. The UAA Kimura Art Gallery is named in her family’s honor.

Kimura submitted an acrylic painting of her flag design for a contest the city was having in 1973. It’s almost exactly the same as the flag flying at the museum and the library today.

In 1975, in a Anchorage Assembly resolution, the seal design from the flag was adopted as the official seal for the city of Anchorage, the same seal the municipality uses today.

Thorne Bay, Wrangell, Wasilla, Homer, Houston and Ketchikan are a handful of other cities in Alaska that have official flags. North Pole features Santa Claus on their flag. Seward’s flag was chosen in 2016 from a contest that featured art from over 350 schoolchildren.

Some might ask why a city flag is important. Kaye says flags can be used for people to identify with and to rally around.

“City flags look both inward and outward. Inward they create a sense of identity to tie the residents together and help define who they are. Outward a flag creates a brand to represent the city to the outside world.

Residents see the municipal seal everywhere, from liquor licenses, to ballots, to the sides of municipal vehicles. However, spotting it flying is far rarer.