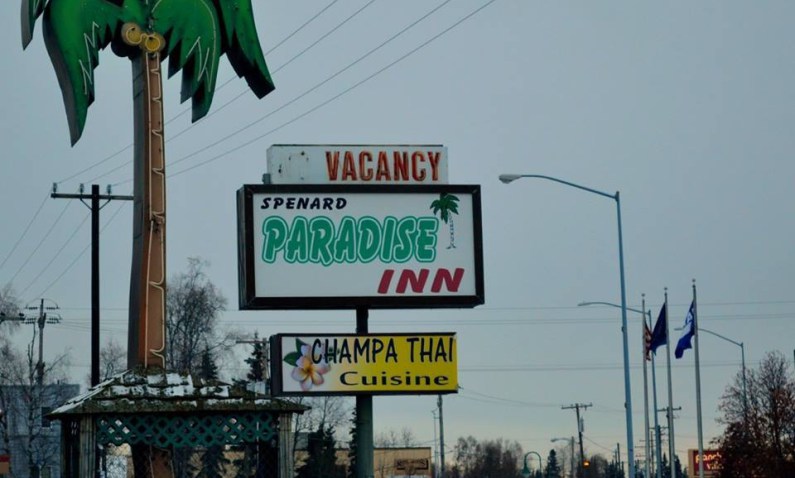 Originally published in The Spenardian.

After a federal seizing, a legal battle, an auction and more, Spenardians have an idea for where they want the Paradise Inn palm tree to rest. The 22-foot-tall broken neon symbol of Spenardian pride will be welcomed with a homecoming parade in the near future.

Melissa Rustemov Lohr and Mike Linz both said in comments on our Facebook poll that they’d like to see it parked near food trucks, situated next to its sister symbol, the Koot’s windmill. While others have said the palm tree represents a dark history. Kim Whitaker, the president of the recovery group Real About Addiction, told KTVA news that the palm tree is evil. “If it was up to me, it would be shattered — like the lives that have been shattered and taken advantage of here. And the families of the loved ones that were here that have been traumatized,” Whitaker said.

Jay Stange, president of the Spenard Community Council and local high school teacher, has purchased the palm tree from federal auction using donations he raised from 59 people in a GoFundMe campaign. The goal was to bring the palm back home to Spenard.

“I think the palm tree is a symbol of Spenard,” Stange said. “Whoever made it put hundreds of hours and love into it. I want to restore it, just like Spenard.”

The palm tree sat at the site of the Paradise Inn, which was built in 1962 as the South Seas Hotel and Lounge. The hotel and even the palm tree were sisters to a bar and lounge of the same name, which sat on Fourth Avenue and G Street in the 1940s. There, a smaller, curvier neon palm tree in the same California tiki-style, sat on top of the bar’s sign. Anchorage Daily News reported the hotel was built during a time when Anchorage was in need of accommodation options for growing number of tourists.

After new ownership, the Paradise Inn began to attract sex trafficking, drug dealing and other criminal activity. In 2014, Kyong Taek Song, former owner of the Paradise Inn, was sentenced to prison after he sold meth to a government informant in the basement of the Spenard hotel. The Paradise Inn is now evicted, boarded up and in the hands of the United States Marshals Service, tree and all.

A legal battle, a crowdsourcing effort and more would decide the historic palm’s fate. Denali Disposal, a local waste removal business, was contracted by the Marshals to remove 12 30-foot dumpsters and two 24-foot trucks of garbage from the building, in which the government paid $37,000 to remove. While removing the trash, Denali Disposal’s Bernadette Wilson was told she could take the tree. Screenshots of text message correspondence can be found on the company’s website. Then, the Marshals said they made a mistake, and that the tree was to be auctioned. In April 2018, the battle ended in court and in the favor of the Marshals who repossessed the palm tree and placed it for auction with a starting bid of $4,500.

Stange created the GoFundMe campaign to raise the $4,500 needed to buy the tree at auction. When the deadline came Stange had only raised $2,700. The auctioneers, Gaston and Sheehan, created a new auction with a minimum bid of $2,700. Stange used the donations and won the bid with no other competition. Stange will house the palm tree behind the Church of Love until he can find a company to restore it. Then, he said he wants to place it in Spenard as a public art piece.

“If we put it on private land, it might disappear again,” Stange said.

Currently, the palm tree is waiting to be picked up at Vulcan towing. The owner, Justin Creech, donated his time and equipment to help Stange transfer the tree to the Church of Love. However, the truck and equipment weren’t able to fit through the back lot. Now, Stange is working with Cook Inlet Housing on finding a new spot, while also exploring other ideas. One idea would be to put the tree back where it was and have the city purchase the Paradise Inn to create a public space.

Once the tree is somewhere secure, neon repair workers will come to look and appraise the restoration of the tree.