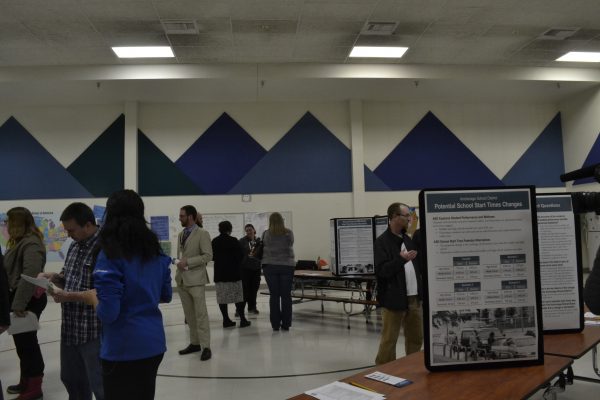 The district held a series of open houses recently to educate the community and hear feedback.

At the first open house for school start times, poster boards are set up on tables inside Lake Hood Elementary. Parents, teachers and community members were gathered around tables, talking with school district personnel about the potential start time changes.

Pamela Witwere, a parent and a teacher at Gladdyswood elementary school, says she’s worried about the potential change.

“I have major concerns because my kids aren’t early risers, and many of the families that I work with, none of their kids are early risers,” Witwere said. “So these aren’t kids that are up at 6 a.m. They struggle to get to school at 9 as it is,”

The school district is proposing the change in an effort to improve attendance, reduce tardiness and increase graduation rates. The school district cites national research that suggests middle schoolers and high schoolers do better with later start times and and younger students benefit from starting earlier.

“This change isn’t as simple as just change the start time and everybody will be happy. The entire community is nearly affected, so we wanted to be sure that we data sourced it,” Bishop said.

Bishop says she recognizes that switching elementary schools to an earlier start time will not be easy and she understands the change would ripple throughout the community. Childcare is a big issue — making sure daycare providers are able to adjust their schedules to match the school district. Bishop says the district would hope to tackle that issue through partnerships with local nonprofits.

The school district is proposing four scenarios, one of which is no change to the schedule at all. The other scenarios have high schoolers starting at 8:30 am or after, and the elementary students starting no later than 7:45 am.

“So as far as the quantity of research that’s out there, there’s significantly less. So some of the minority opinions and some of the more recent research is saying earlier start times are not necessarily good for elementary school children either.”

But Bingham says the research they conducted on elementary students showed that younger children who had to wake up earlier weren’t negatively impacted.  .

Jose Lopez attended the Lake Hood open house with his wife and three children. He thinks it would be hard for elementary kids to make the switch.

“I have three kids that attend school early. I kind of have a hard time making the younger kids start earlier than the older kids,” Lopez said.

The Anchorage School District says the comments received so far have been mixed. Parents of middle and high school students tend to be in favor of the change, while parents of elementary students are not.

The Anchorage School Board will make a decision later this year, and any change will be implemented in the 2019-2020 school year.