Originally published in The Northern Light.

In October of 2015, Vered Mares purchased Adults Only, a pornography shop in the Spenard area that had been in business for decades. Mares had the idea and business model of changing it into a bookstore with a full service cafe and art space. The current building, which is two trailers hooked together, will be demolished this May. After, she will begin construction on a new building twice the size of the current one.

“it’s sort of the last vestige of the Spenard old red lights district, you know, that’s what this place was back in the heyday. It was a pornography store, but I think it was also a whole lot more than that. What was once a fairly undesirable business in a neighborhood is being turned into something that can really be part of the neighborhood,” Mares said.

Spenard is known for its scandalous past as the place on the outskirts of tent city where people went to have a good time. From crack houses, rowdy bars and pornography shops, Spenard has rejuvenated itself in recent history to be known as a funky and engaging part of the Anchorage community. With the introduction of specialty shops, popular bars and restaurants the neighborhood is being transformed in a Spenardian Renaissance. Mares, her many business partners and volunteers have been working since fall of 2015 to transform what was once an element of Spenard’s less than desirable past, to something that will benefit and engage the entire community. 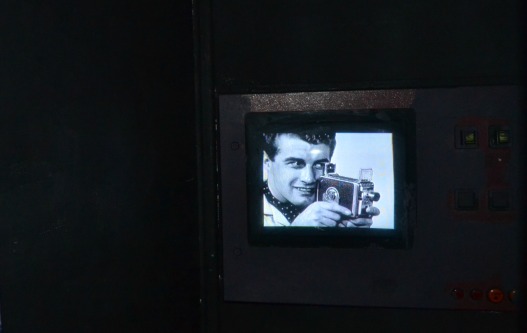 “This neighborhood has a history and whether we like it or not it’s part of Anchorage, it’s part of Spenard, it’s part of Alaska,” Mares said. “It wouldn’t have the same interesting and quirky flavor without that history.”

The Spenard Renaissance is made possible by the creative people who live, work and play in the neighborhood. With boutiques, local bars and restaurants, and the introduction of Writer’s Block Bookstore and Cafe allowing a place for people in the community to come out and freely express themselves the neighborhood is changing from the inside out.

“It’s easy to be excited with change. What’s really interesting is that the groups of artists that are engaging in these events are looking at the neighborhood on the whole as a place of creativity, as a conglomerate of creative resources. It’s easy to see what’s there. But it takes artists to see what’s more,” Sarah Davies, local artist and creator of the 100 Stones project, said

The idea for Writer’s Block Bookstore and Cafe came from Mares’ frustrations on what the community offered and didn’t offer.

“When I first moved to Alaska, almost 10 years ago, what really irritated me was that I couldn’t get a really great cup of coffee after 8 p.m. There also weren’t any independent bookstores. These were the three things that sort of ruled my life up until they were gone,” Mares said.

The bookstore will have a full service kitchen and cafe, selling an eclectic mix of international dishes and comfort food. Mares hopes to incorporate dishes less commonly found in Anchorage while infusing foods from her Israeli and New Mexican heritage. The cafe will have a typical coffee menu as well as a sophisticated selection of coffee from around the world. The cafe will also hold a beer and wine license.

In addition to the cafe, the space will also allow a place for artists of all types to congregate and share their art. Whether it’s writing, sculpture, painting, photography or music, Writer’s Block will have a space to showcase local artists.

“We are trying to keep as much as our business as local as humanly possible, from where the food comes from to where the books come from to who we hire and how we engage in the community. Anchorage has an incredible creative community that I think is still untapped and is underrepresented,” Mares said.

With an emphasis on local artists, it is Writers Block Bookstore and Cafe’s number one priority to give preference to Alaskan authors. Mares wants to feature local writers in her bookstore, but will also provide a myriad of other literature. All books being sold will be new.

“Right now we don’t have an independent bookstore in Anchorage, there’s not really an avenue for new literature that’s not in a large corporate model that exists in Anchorage,” Mares said. “We want to engage with our local literary community first and foremost. We’ve got some amazing writers here and we want to be able to showcase them here. Some of your favorite writers might be down the street from you and you just never knew it. We want to support our local writers as much as possible.”

Before construction even begins the business is giving a place for artists to thrive. While Mares and her team are waiting for the construction to begin and the old building to be demolished, local artists were asked to occupy the building as an interactive community art piece.

Three events are taking place this month to allow the community to engage in the installation and the vision of “Transforming ADULTS ONLY,” as the series of events is being called. For three consecutive Fridays, starting April 15, the community is invited to participate in the events featuring local artists, food trucks, musicians and performers from around the city to pay homage to the past and get involved in the future of the neighborhood.

“These three events will be celebrating what Spenard once was and where it is going. As far as I know, this is really the last iconic reminder of Spenard’s past and it will be torn down in May for the Writer’s Block, a business that seems to better represent the residents and frequenters of Spenard these days, as many creative types choose this part of town for their homes and places to spend time…” Val Svancara, Outreach and Engagement Coordinator for the Transforming ADULTS ONLY events, said. “In fact, many of the artists working on this event are Spenard-based.”

Many have seen Mares efforts as gentrification of the neighborhood. Mares wants Writer’s Block Bookstore and Cafe to be a place for her neighborhood to enjoy and be a part of.

“It’s not about gentrification, this term gets brought up a lot when I’ve been talking to people. It’s not about gentrifying, I don’t want to change Spenard. I want to bring more of the fun, quirky, unique elements of Spenard and bring them into a central location. This is where I live too, I don’t live in another part of town or even outside of town I live half a block off of Spenard road.” Mares said.

Mares is currently raising money through a GoFundME account (https://www.gofundme.com/pb7nl8) which has raised over $20,000. All of the proceeds of the GoFundME account will go towards construction and opening the doors of Writer’s Block Bookstore and Cafe. With certain awards offered for particular contributions patrons will receive more than just a good feeling for contributing to Mares efforts. From a cup of coffee to having a bar stool dedicated in your honor, those who donate will receive more than just a thank you.

The series of Transforming ADULTS ONLY events will take place every Friday for the rest of April: April 15, 22, and 29 from 6-8 p.m. The events are free of charge and will provide local entertainment, lawn games, food trucks, a beer garden sponsored by Spenard Roadhouse and community involvement. The Writer’s Block Bookstore and Cafe plans on opening their doors this fall.